Please read at your discretion, as this recap contains spoilers. To see the recap of episode 8, please click here. 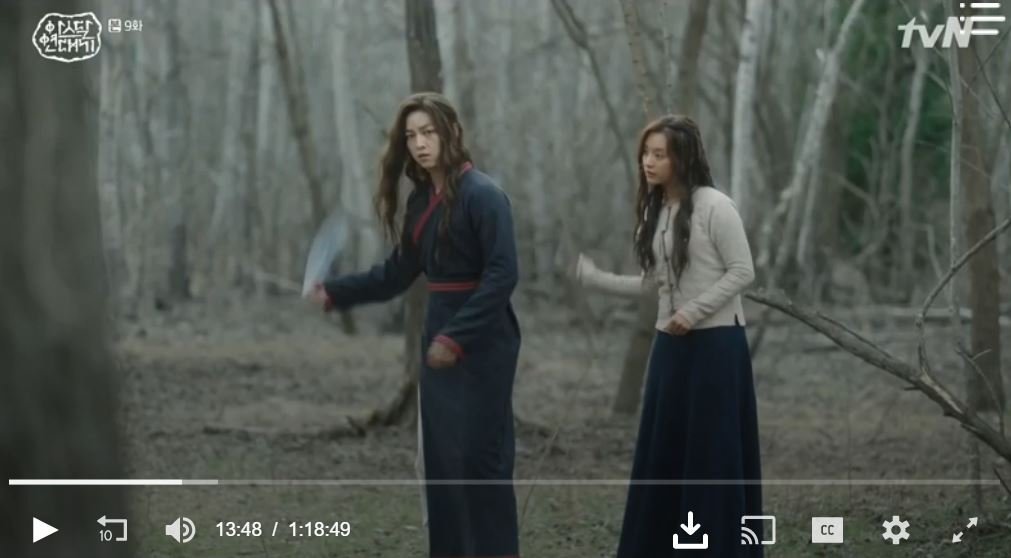 While Tanya has made up her mind to avenge Eunseon’s brutal killing(though we are aware he is not dead), she plans to gain power by starting off with Saya. At the beginning of episode9, we witness her and Saya spending quality time together. Saya in the process finds himself liking Tanya much more, though Tanya is set on her goal we see her laughing and smiling for the first time since she has left Wahan.

She thought him how to catch birds, which gave him a glimpse of what it is like to be a Wahan.  Tanya also questioned Saya about the Union and how it was founded, Saya not knowing why she is curious, answers willfully.

Tanya believes that for her to acquire power in Arthal she must first learn the basic functionalities of their systems and way of life. I must say, Tanya has chosen the right person to understudy as he is very knowledgeable about the ins and out of Arthdal. 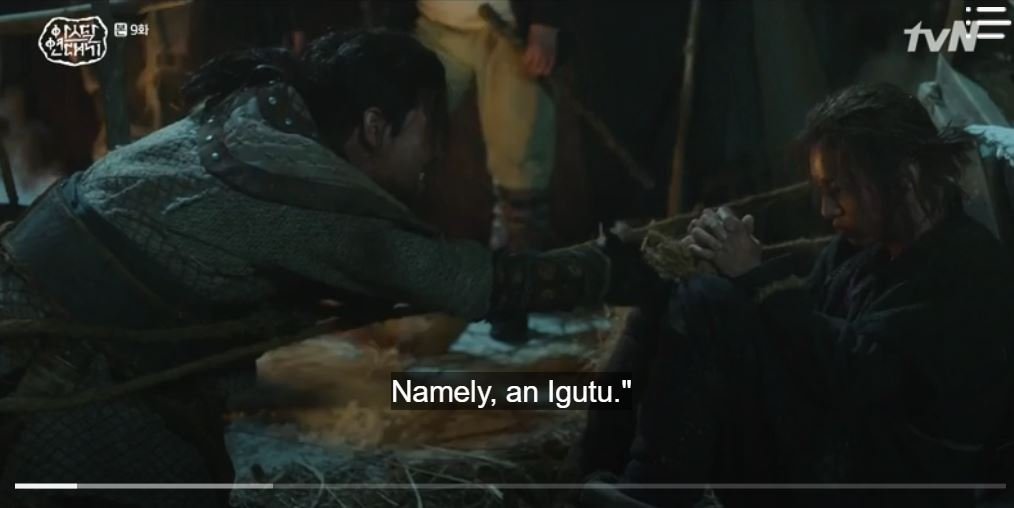 In episode 8, Eunseom was captured as a slave after he and his friends decided to save the remaining men of Wahan tribe that were being carried away to a far place.

After finding out that Eunseom was an Igutu, he has been severely beaten ever since. While the slave masters believe that that the dujeumsaeng are below Sarams, they also think that Igutus are the worst kinds and are actually below dujeumsaeng.

Not only this but they insulted his mother and his background, his entire being. These men were quite spiteful as they wanted the captured men to admit they were animals; it was only then they would be given water.

They were treated poorly, tied up, beaten and starved for days.  Eunseon got the worse of it as he was harshly beaten beacuse he was an Igutu.

As the episode progressed we saw Eunseom finally fighting back to the insults by spitting in one of the men’s faces.  This however made them beat him more.

At first, when Eunseom was being beaten severely I was a bit disappointed in his character; knowing his true abilities and the extent of his strength left me demanding more out of his character. 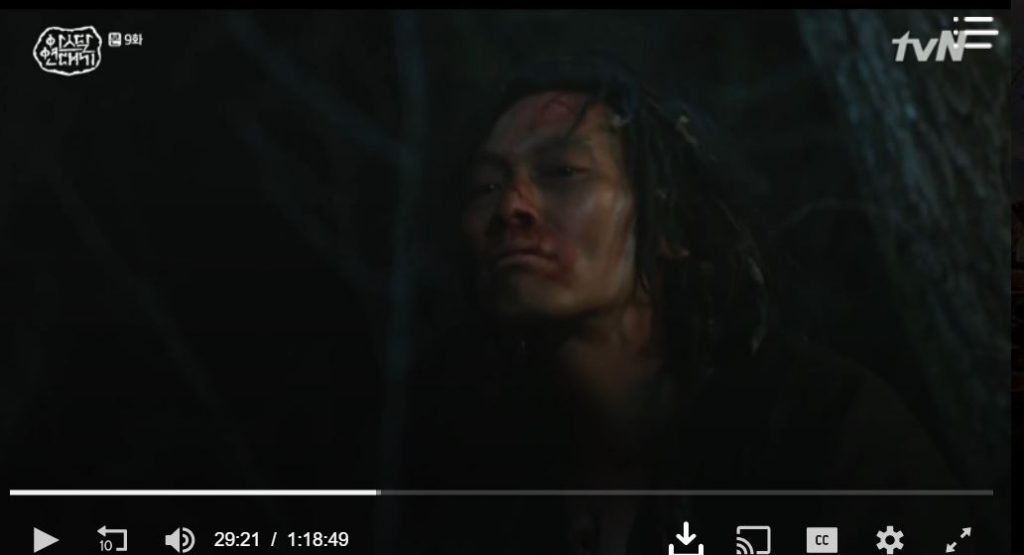 In an attempt to get Eunseom to give in and admit that he’s a lowly animal and that his mother is a whore that slept with Neathals, Teodae dying of thirst approached Eunseom and begged him.

However, Eunseom wouldn’t give in as he held on to the last bit of pride he had remaining. It was then Teodae killed himself to spite Eunseom.

Eunseom shocked and hurt by his sudden death cried and wailed.

Tagon Moves Ahead With His Plan

In the previous episode, we saw where Tagon had appointed and invited the ministers of the various tribe to live in Arthdal. They were quite thankful for the invite not knowing what Tagon’s ulterior motive was.

In this episode, Tagon sent Daekan soldiers to guard Minister KungTung’s home. By removing his personal security and appointing his, Tagon will keep the ministers under close surveillance.

In a meeting with all the ministers, Tagon further announced that his father’s death was caused by loose security. Using this as an excuse we see where he further declared that only the Daekan forces will be allowed to carry weapons inside Arthdal.  By removing their personal guards and preventing them from utilizing weapons, Tagon limits their power.

I must say even though Tagon’s doing is quite sinister, we see where he effortlessly guided everyone to fall into his trap.

Also by having Taehlea as one of the ministers, Tagon is fully supported and his orders are well received by her even if it goes against the wishes of the other ministers.

Realizing the trap they have fallen into the looks on their faces appears to be worrisome.

Asa Ron Succeeds For A Minute

In an effort to turn the people against Tagon, Asa Ron and his team came up with a plan to make the people believe that gosals (spirits) of Igutus and Neanthals have attacked Arthdal. Tagon is believed by the people to be cursed since it was he who came up with the plan to wipe them all out.

To achieve his plan, Asa Ron manipulated the people by painting the tail of a bird blue; which signified great catastrophe and putting Laughing Gym in their drinking water which caused them to behave demented.

In fear for their life they prayed and begged Isodungyong for forgiveness.

Tagon who later heard of this knew it was all Asa Ron’s doing. He was called to the Great Shine to participate in Isodunyong’s Saenamsani ritual(a ritual to soothe revengeful spirts). This angered Tagon greatly as his power had been undermined.

Asa Ron informs him that it was done by him. Asa Ron also made it clear that as long as the people have him in their hearts Tagon will forever be in second place.

Meanwhile, Saya who sees the truth and knows that it is Asa Ron’s strategy, to remove his father from his place.

Further on in the episode, Asa Ron was brought to the understanding that the scheme he came up with later played against his strategy as the tiger which was found dead with blue blood wasn’t done by him. Hence it must have been done by real Neanthals. Shocked at this discovery he is left dumbfounded.

Meanwhile, we see Chae Eun’s sister confessing to having seen actual Neanthals in Arthdal.  Since the massacre of the Neanthals many believe that their entire nation was wiped out, however in this episode, we saw two Neanthdals in the woods(I must admit, these were two drop-dead gorgeous Neanthals). The tiger that was found must have been killed by them hence the blue blood.

After finding out how Asa Ron’s plan shook Arthdal, Tagon is left feeling insecure about his ability to rise higher. Though it is in his will to try he doubts whether or not the people will put their trust in him.

Taeahla who is saddened by his state tries to comfort him. He also begins to question persons around him such as Mubaek, one of his most trusted and loyal men. He is aware that Mubeak visited Asa Sakan and that he is hiding things from him.

Taeahla lets Tagon know that he cannot allow Mubaek to be on the opposite side of his plan, as half of the Daekan force favors him and will even give their lives for him.

So he captures Mubaek, ties him up and confronts him as to why he has been deceiving him. Mubaek then admits to deceiving him and aks Tagon if he was the one that killed Sunung Niruha.

Tagon aware of his surroundings came up with a sob story to deflect.

When asked why he met with Asa Sakan, Mubaek revealed to Tagon one of Asa Ron’s biggest weaknesses and that the true descendants of Asa Sin are apart of the Wahan Tribe bloodline.

It was revealed to Tagon that Tanya the girl working as Saya’s maid is the direct descendant of Asa Sin and also the Great Mother of the Whan Tribe.

Additionally, in this episode, Mubaek tries to find out more about the Great mother of the Wahan Tribe so he visits Tanya’s father where he was informed that Tanya is actually the Great Mother. He makes a promise to save the people of Wahan.

Meanwhile, in this episode, Tanya learns of the secret place Saya was always sneaking off to. After following him there, she saw the totem that she was told to find.

Previously in this episode, Saya had explained to Saya the ways in which Asa Ron scheme would have benefitted him; according to Saya people worship those they fear.

In the past, he revealed that there were some people who worshipped the Neanthals and now that Asa Ron has called upon  Neanthals’ spirits, people will begin to be fearful again and even start to worshipping them once again.

So it benefits Saya, that his kind will again acquire dominance in their current world.

At first, Tanya did not understand much of what he was saying, but after seeing Saya worshipping Arumun who is actually an Igutu, everything was made clear.

The preview for episode 10, seems interesting, can’t wait for it.