BTS Billboard Music Award Recap is as follows. The Bangtan boys had a great and groundbreaking night at the Billboard awards. They created history in Kpop and Korean Entertainment industry by being first-time winners of a groundbreaking award.

BTS got two big wins at the Billboard Music Awards, first, they won the Top Social Artist award. They were up against fellow Kpop groups EXO and GOT7 plus Americans Ariane Grande and Louis Tomlinson. This particular award was won three times in a row by BTS, first K-pop artist to do so ever.

Their second award TOP DUO/GROUP was, even more, meaning full. It was the first time a Korean Artist won an award of this magnitude. BTS was up against Dan + Shay, Imagine Dragons, Maroon 5 and Panic! At The Disco. This award cemented the fact that Kpop is now a global force to be reckoned with.

BTS stardom as really grown and a lot of other stars have taken note. BTS was seen taking pictures and mingling with the likes of Drake, Ciara, Becky G and more at the Billboards Music Awards. 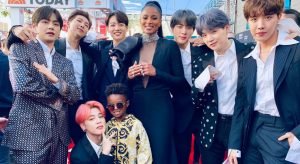 It’s safe to say that BTS had a really great time at the Billboard Music Awards. They made a very clear statement that they have the fanbase to compete with American artist and they have the numbers to back them up.