Crash Landing on You episode 12 Recap and Fans Reaction

And the best part was when Seri said “I’ll organize a piano concert for you. Given your talent , you can perform at the Seoul Arts Center. Hold on. Should I just buy the Seoul Arts Center?” I think I’ll be able to buy it. They’re not even being clingy. They’re just there sitting and drinking, no hugs and kisses and yet I found RJH love confession so romantic. What woman could resist such? ❤️

Love the fierce Se-ri … this episode had me crying and laughing at the same time. The scene with the stepmom was a bit hard to watch, I just don’t get how she could sit in front of Se-ri and act all hurt because she doesn’t believe she cares about her, this same person who abandoned her as a child in the middle of nowhere — that she can even look her in the eye is beyond me and she calls herself a mother. 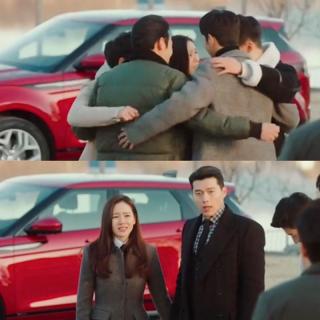 This episode is just so heartwarming and funny. The comrades tried to look for Captain Ri but always missed their chance ahaha so close yet so far. When they finally met, my heart literally fluttered, it was so heartwarming!! Seri hugging all of them was so cute and heartwarming too!!

comment By:  PellMell: LADIES AND GENTLEMEN!!!  I present you THE COMRADES!!!!

Comment By: KMaikee_G The reunion was really nice also… Just when they were already about to lose hope, it was Captain Ri who found them after all. LOL! They’re like a family already… awwww….

Second Leads Getting Closer together

The two second leads are getting closer. And it seems the male second lead is already in love with the femal second lead. He waits up for her calls, confess his crimes and life story to her. It also seems that in the next episode the the female second lead will start falling in love as well.

The writing, acting and directing in this drama is actually phenomenal. everything is so well balanced that there’s very few moments that pull you away. From the Ahjumaas, to the Memories of the Alhambra moment, the SECOND LEADS, Se-Ri’s breakdown, and then the Epilogue. Omomomo