According to SBS, additional information regarding Yoo In Suk the Yuri Holdings former CEO has been made public.

It was reported by SBS today, that Yoo In Suk was actually a leading figure in the chatroom scandal. Over the span of a week, numerous individuals names have been publicized including the former CEO of Yuri Holdings, Jung Joon Young, Seungri, Choi Jong Hoon, and four other individuals.

Based on the messages discovered, It appeared Yoo In Suk, who is also known as actress Park Han Byul’s husband had a close relationship with the police chief. Yoo In Suk is reported to be the person who resolved problems in the group whenever chatroom members Seungri, Jong-hun and Jung Joon Young were faced with problems with the law.

In the group, he was given the name CEO Yoo, which suggests the influence and authority he had. In 2016, it is alleged that he assisted Jong hun cover up his drunk driving incident.

According to SBS, Yoo In SuK had told reporters that, the chatroom contents were exaggerated because his younger friends, referring to other chatroom members, wanted to show off. He then dismissed the allegations as false. He later told a different story when he confessed to contacting a police superintendent during questioning by the police on March 14.

In 2015, it was also seen in the messages whereby Yoo In Suk had given out several instructions to “prepare women” for a Christmas part, stating that:

”We’re the ones who’ll create The Great Gatsby movie.

Lets call the girls we know that day. To the point there aren’t any girls left in the clubs.” 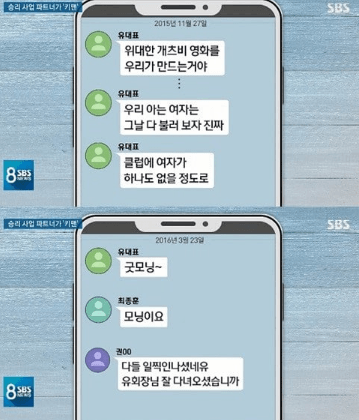 It was revealed earlier today that the CEO of Yuri had resigned. Apparently, the former CEO had been feeling a lot of pressure about work at the company ever since he got caught up in such scandalous incidents and had to go through the police investigation.