Search: WWW Episode 1&2 Recap. I recently started watching Korean drama Search: WWW and decided to start doing recaps and reviews since I’m enjoying it so much. This drama has proven to be quite impressive with its powerful yet fallible women.

Drama Obsess will be recapping this drama going forward, so please stay up to date with us. Here is a quick synopsis of the plot:

Search: WWW portrays the stories of three ambitious career women who are working at the top of leading portal sites in the IT industry. They don’t trust love, find it useless and a waste of time. But, their road to success takes a new turn when love comes along the way. The drama describes modern love in a realistic way.

Here are some of the highlights that occurred over a series of 2 episodes.

Episode 1: Cast Introduced and Their Relationships are Defined 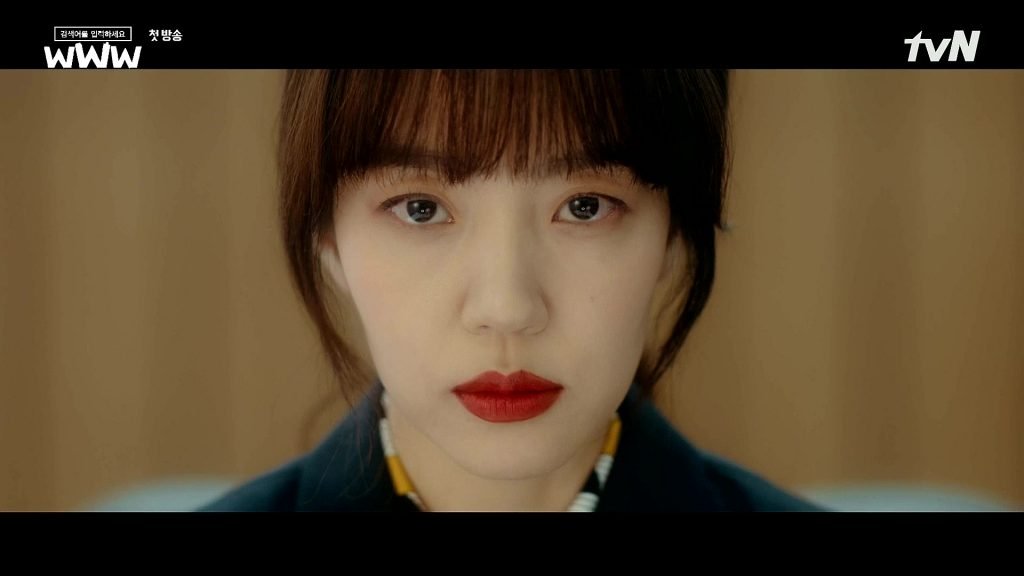 So basically Episode 1 started with Bae Ta Mi (Im Soo-jung) at a press conference being investigated for issues regarding her company, Unicon.  Here we saw where assemblyman JOO SEUNG-TAE ( Choi Jin-ho),  makes the accusation that Unicon is doing a disservice to the public since they have been manipulating keywords to sway public opinion.

Unicon is accused of deleting negative keywords referring to a presidential candidate in the recent election, but Ta-mi stands her ground and says that it’s normal for keywords to disappear as its the algorithm of the search engine. In her heart, Ta Mi knows that the accusations are true, which makes her feel troubled because she is the type of person that is honest and straightforward, so to be bluffing to protect her company, it goes against her ideals.

In this scene also, in an attempt to sway public opinion Tae Mi manipulated the situation and turned all attention on assemblyman Joo Seung-Tae, by mentioning his illicit sexual activities with underage girls. 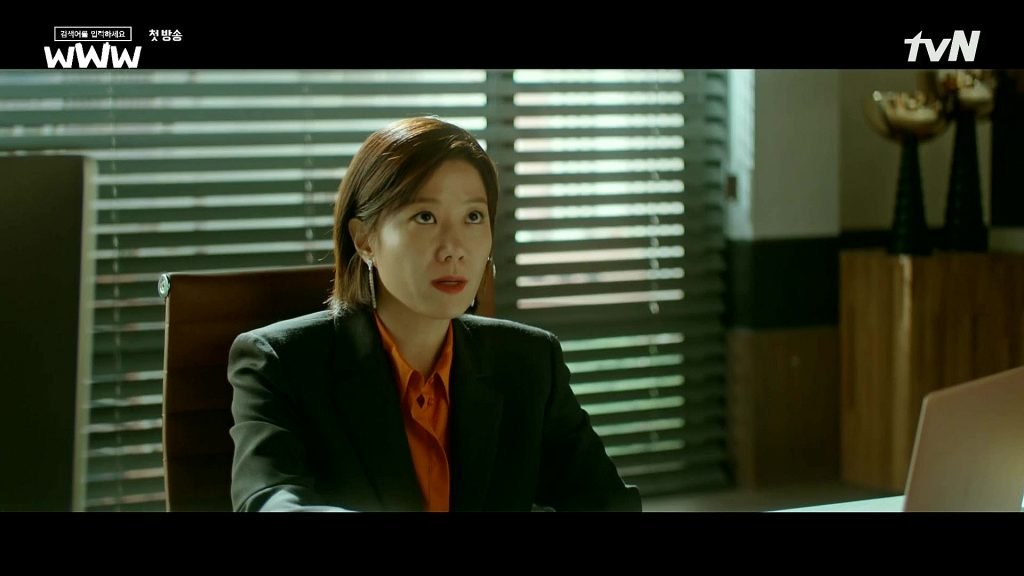 Also, episode 1 introduces us to Director SONG GA-KYUNG (Jeon Hye-jin), the boss of Tae Mi, she’s a strong woman however at times she is pressured to please those around her. In episode 1, we found out that persons within her personal space aren’t really true to her and tends to take advantage(such as her mother-in-law and her unfaithful husband).

At times,  she may want to do what is right however she is influenced to do otherwise. 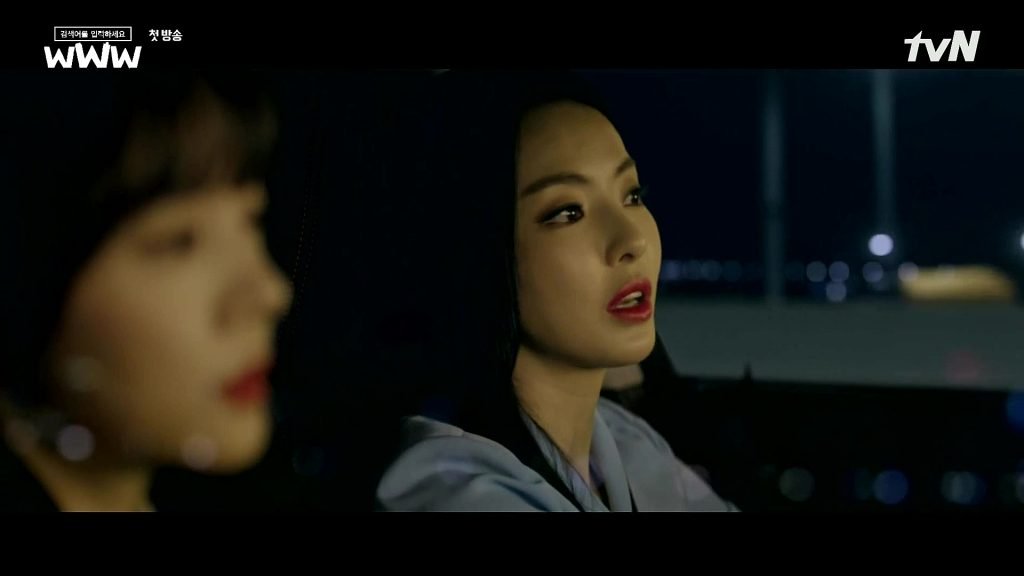 Episode 1 also introduces us to Cha Hyun, also a modern day independent woman, who is actually Tae Mi’s competitor who works for Barro, the next most popular search engine after Unicon. Despite their odd relationship, we see where she saved Tae Mi from the multitude of reporters, aiming at Tae Mi for an explanation regarding her assumption of Assemblyman Joo.

Flawless and stunning, she also surprises people with the fact that she is a former judo player. 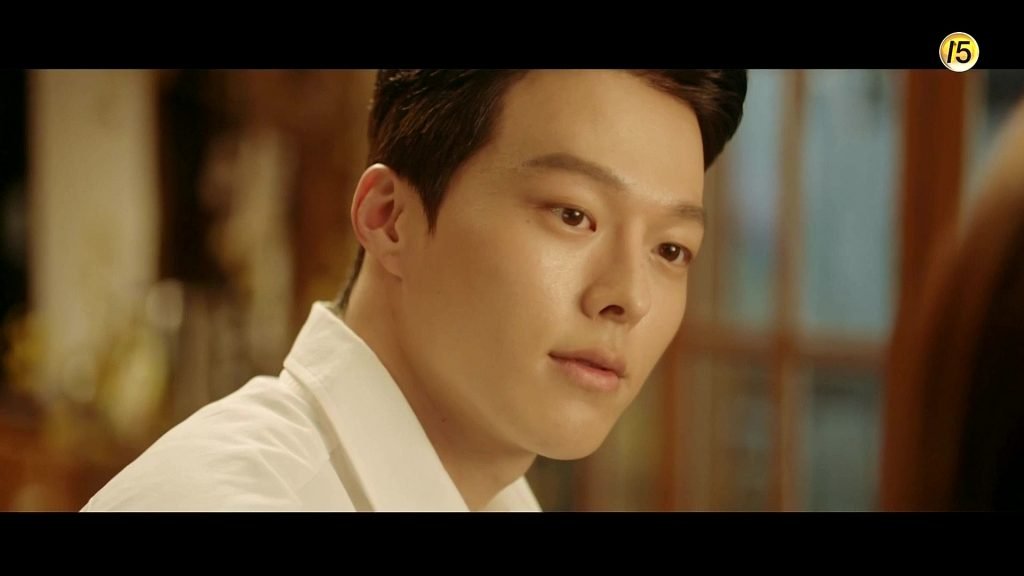 Tai Mi, in episode 1 at first shows the side of a modern day woman, who is focused on her career mostly, however with the introduction of Park Mo Gun (played by Jang Ki-yong), we saw where another aspect of her life began to gain attention.

Episode 1, revealed to us the first time she met Mo Gun in a gaming store. After being beaten by him, he instantly caught her attention.

The two had a few drinks which led to a one night stand, not knowing what was yet to come.  Though Ta Mi is normally a strong and confident woman when she met Mo Gun for the second time at the end of episode 1, we saw where she became flustered.

Let me say, I always enjoy Noona Korean dramas and I think these two make a fantastic couple; they are not the regular cheesy older woman-younger guy type. They are actually very mature and straightforward in relaying their feelings. And I really enjoy that. 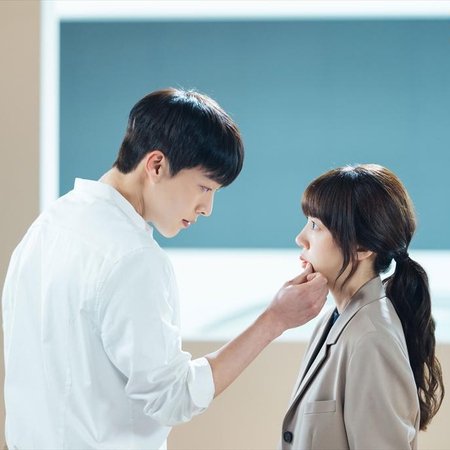 Tae Mi being flustered by her sudden encounter with Mo Gun, seems out of place. In trying to understand what is actually transpiring Tae Mi stares at him with a blank face. In this scene, she’s quite taken back at his age and wonders how everything will play out going forward.

While coming to terms with stumbling upon her one night stand, Tae Mi still has to worry about facing her boss Ga Kyung for her problematic press conference.  Tae Mi had questioned Ga Kyung if she understood why she had brought up the Assemblyman’s sexual activity at the press conference and Ga Kyung responded whether or not it is true, it’s good that Tae Mi appeared confident while saying so.

In this scene also we saw where she had a flashback of her and Ga Kyung in their younger days working at the company. One of the important rules that they had planned to maintain was to deliver impartial information and to create a web portal that would never violate its users’ freedom of access to information.

Tae Mi is disappointed in Ga Kyung as she is aware that Ga-Kyung fabricated the keyword rankings on behalf of KU Group, her mother-in-law’s company, and that the hearing was a scheme. 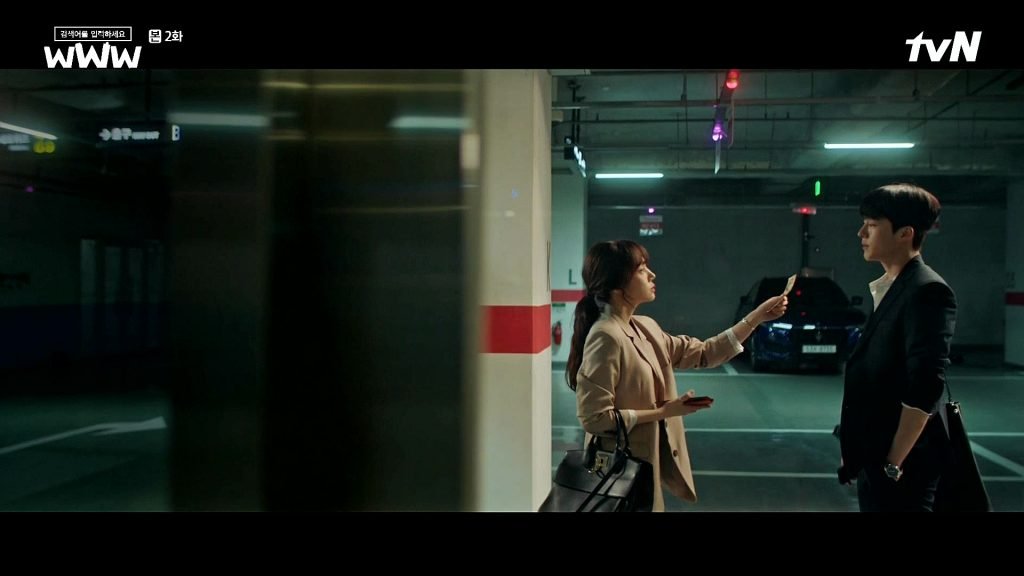 Also in episode 2, Tae Mi is approached by Mo Gun who  lets her know that what happened between them was not a mistake. He makes it clear he has further intentions to pursue her.

Mo Gun who is quite cheeky and straightforward surprises Tae Mi with his unapologetic personality. 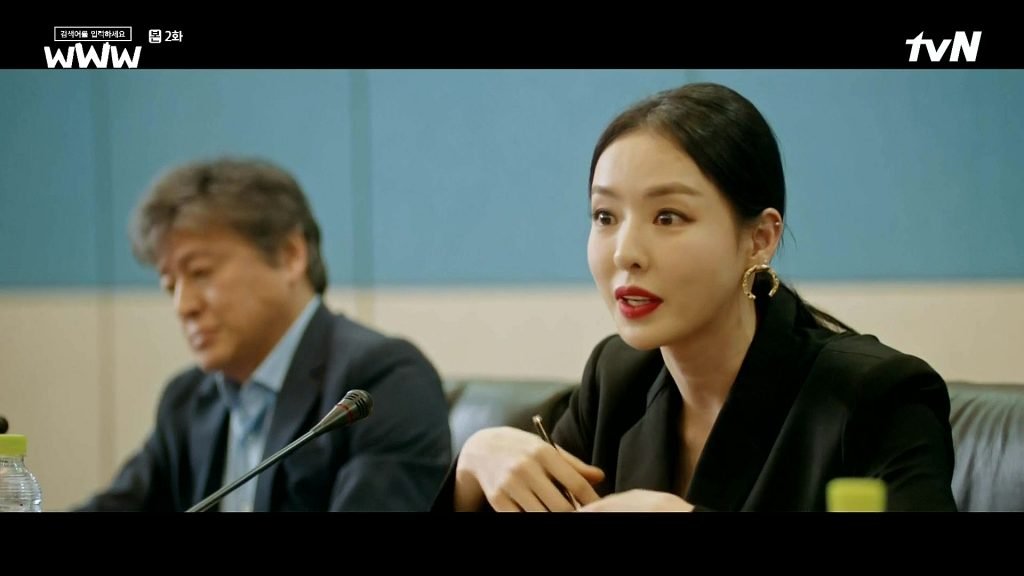 Additionally, in a debate held at Barro, Tae Mi and her competitor Cha Hyun goes back and forth accusing each other’s company of illegal conducts.  Cha Hyun who believes Tae Mi spun her way out of the press conference decided she will pressure her to answer all the necessary questions.

Their points got personal, with Cha Hyun stating that she’s embarrassed to be in the same field as Tae-mi, and Tae-mi answering that she’d rather cheat than be in second place. CEO Min finally breaks up the catfight, but a rivalry has been born. 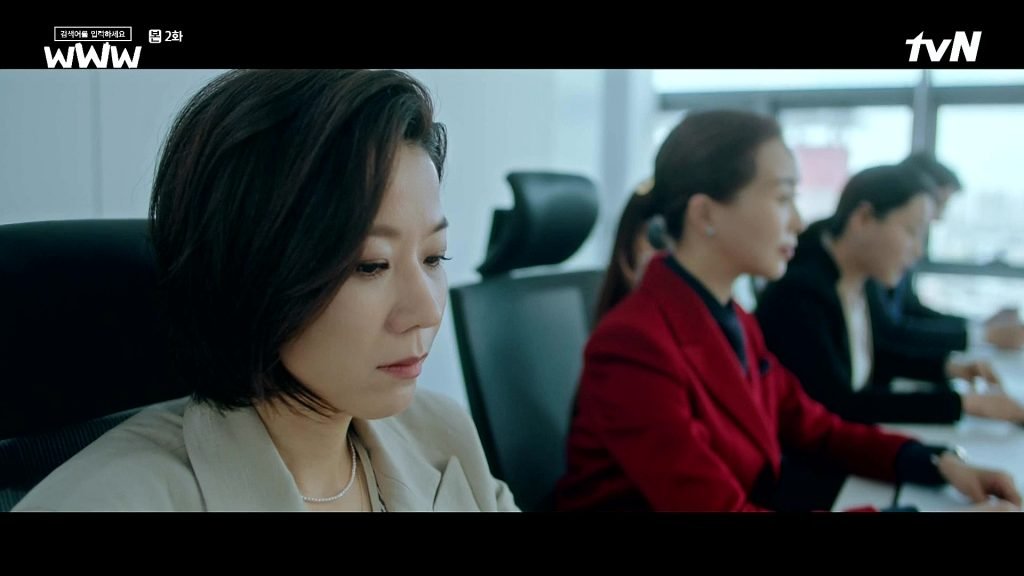 Back at Unicon, Tae Mi finds out she was used as a pawn and was called to the board where they fired her. Tae Mi who had become restless of the activities taking place at Unicon decides to accept her dismissal. She has become resentful towards Ga Kyung as she’s enabling corruption in the company.

Ga Kyung has indeed become a slave to Unicon and finds it hard to break away. Though she appears to be strong, she is crumbling inside. 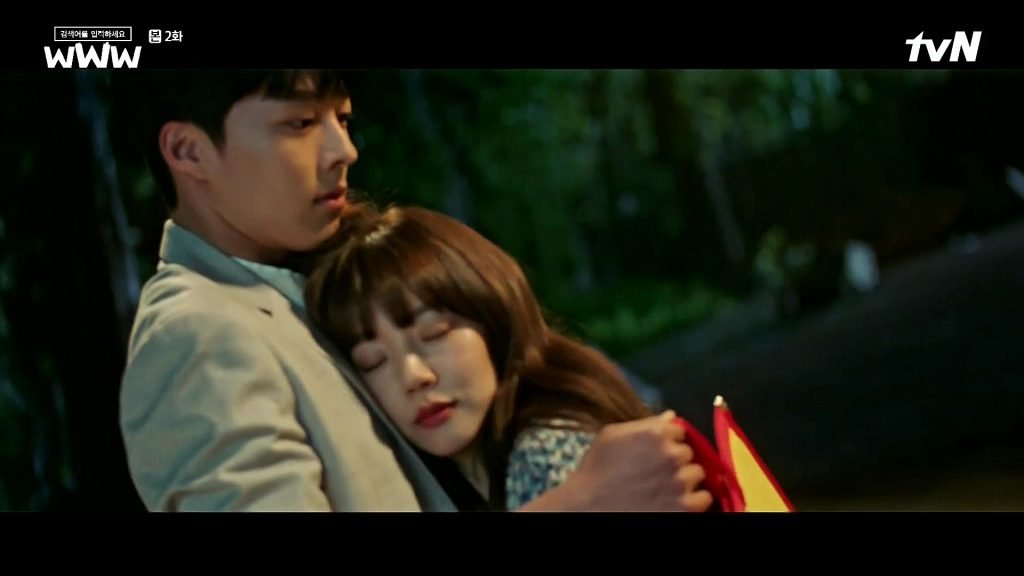 Tae Mi now unemployed has the time to think about other things besides from work. She began feeling lonely and decides to go for a drink, in her drunken state Mo Gun arrives and expresses his interest and offers himself to her.

In sharing their misfortunes Mo-gun points out that he’s a man who got drunk and slept with a stranger, whined at investors, and started a company and went broke, so if they’re comparing hardships, she’s got nothing on him. 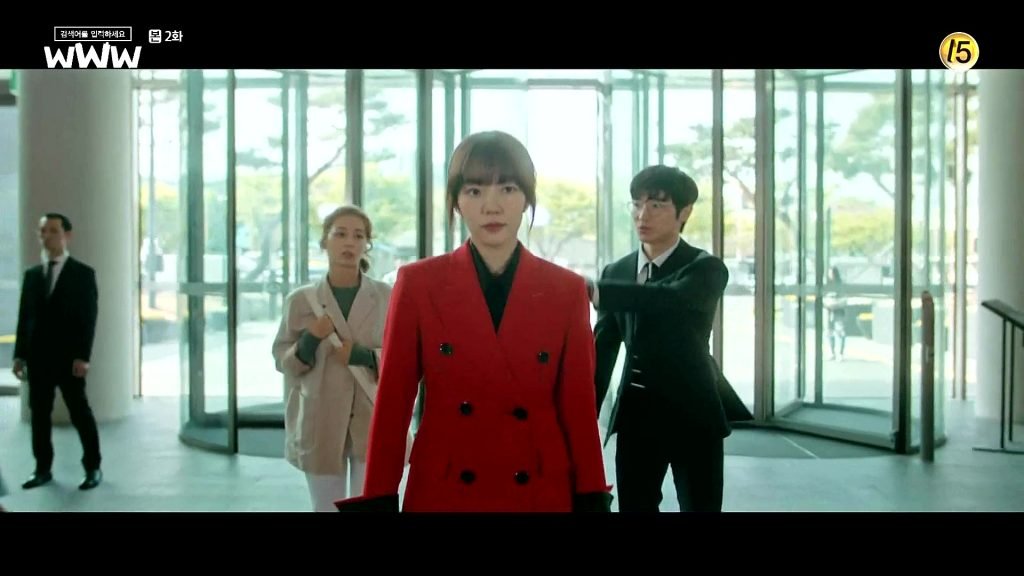 Tae Mi who have felt wronged by Unicon decides to work for their competitor, Barro. Unapologetically, she walks into Unicon and declares her truth; it is her plan that she will work hard to ensure that Unicon ranks second to Barro going forward. Inspired, her understudy decides to follow her to Barro.

Arriving at Barro she and her team realize the difference to that of Unicon; a happy and creative place that is open-minded. Determined to make a change Tae Mi is unphased by the hostility of Cha Hyun.

I must say episode 2 ended with excitement, Ga Kyung who felt insulted by Tae Mi’s post got angry and slapped her across the face.  Tae Mi who appeared unbothered by this seemed determined to make Ga Kyung’s life discontented.

To watch Episode 1 and 2 of Search WWW, you can visit Kissasain.

I will most definitely be working on the most recent episodes and have them published,

To see the upcoming dramas of July 2019, click here.