If you like melodramas that can touch your heart and bring forth the tears, then you will love the two I’m about to recommend to you. These two Korean dramas I have personally watch and enjoy so rest a sure that these are good shows. 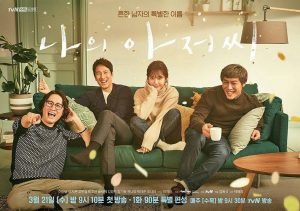 Dong-Hoon (Lee Sun-Kyun) is married to Yoon-Hee (Lee Ji-Ah). His wife is secretly having an affair with a senior executive at the construction company where he works. Yoon-Hee wants to divorce Dong-Hoon and marry the executive, Joon-Young (Kim Young-Min). Dong-Hoon also has two brothers who live with his mother. The oldest brother, Sang-Hoon (Park Ho-San), doesn’t have a job and he is separated from his wife. Gi-Hoon (Song Sae-Byeok) is the youngest brother and he wants to become a movie director.

Meanwhile, Ji-An (IU) lives in a difficult situation. She supports her grandmother who is unable to move by herself. Ji-An is also in heavy debt and is harassed by loan shark Gwang-Il (Chang Ki-Yong). She works as a temp employee at the same construction company as Dong-Hoon. One day, she sees Dong-Hoon receive 50 million won ($50,000 USD) of gift certificates. She goes back to the office late at night and takes the gift certificates from Dong-Hoon’s desk. She tries to pay off her debts with the gift certificates, but her plan doesn’t work out.

Ji-An learns that Joon-Young, the company Vice President, is having an affair with Dong-Hoon’s wife. She goes to Joon-Young and offers to make Dong-Hoon leave the company if he will pay her

Smart and promising medical student Kang Ma-ru (Song Joong-ki) is deeply in love with his slightly older neighbor Han Jae-hee (Park Si-Yeon), a television reporter. But when her situation takes a turn for the worse and Jae-hee becomes desperate to escape poverty, she meets a man who changes everything—a rich CEO who introduces her to a life of comfort. So she turns her back on Ma-ru, choosing money over love.

The brutal betrayal leaves Ma-ru fractured—not just angry, but a completely changed man. A few years later, Ma-ru is now 30 years old and works as a bartender and gigolo, no longer a “nice guy.” He then meets Seo Eun-gi (Moon Chae-won), a young chaebol heiress who’s being groomed to take over her father’s conglomerate. Eun-gi is cold and calculating, business-savvy, and raised by her father to never show emotion to anyone.

Ma-ru decides to take revenge on his ex Jae-hee and bring her down from her position after his sister, Kang Cho-co (Lee Yu-bi) is rushed to the hospital because of Jae-hee. Ma-ru, though initially had no plans as such, uses Eun-gi to take revenge on Jae-hee. Just when Ma-ru is beginning to love and care for Eun-gi, she finds out the real reason why he approached her and they break up. But a car accident causes Eun-gi to lose her memory, and she enters Ma-ru’s life again